//
you're reading...
Health on the Hill, Multimedia Stories

A group of students at the University of Kansas uses these two words to describe how they feel after taking Adderall. If KU follows national statistic trends, then more than 1,500 KU students know this feeling. According to a study by the Substance Abuse and Mental Health Services Administration, 6.4 percent of full-time students age 18-22 use Adderall without a prescription.

Because not all students admit to using Adderall without a prescription, the number of abusers is most likely higher.

Prescription drug abuse is the fastest-growing drug problem in the U.S., according to the Office of National Drug Control Policy (see graphic below.) The Centers for Disease Control and Prevention classifies prescription abuse as an epidemic. 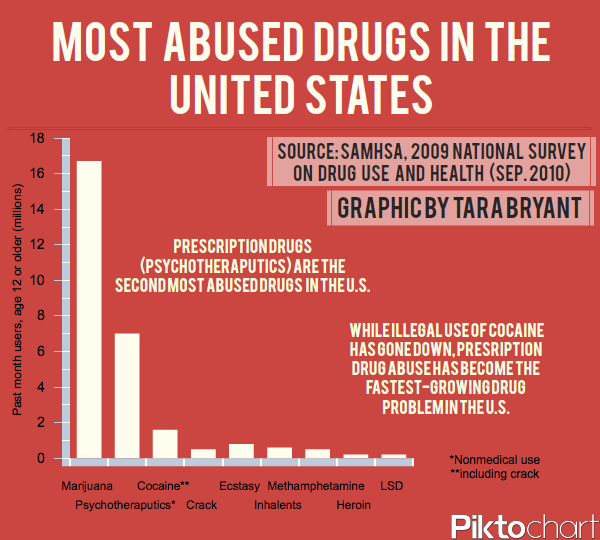 With finals coming up, Adderall is a topic floating around conversations at Anschutz and Watson libraries because students primarily abuse Adderall for studying purposes.

“I definitely use it more around finals,” said Keeler Montgomery, a Lawrence sophomore. “I don’t use it at all academically during the school year. I can keep up with my work, but when finals come, there’s so much going on at once that I can’t.”

But Adderall still has a presence on the KU campus before and after finals. Of those who admit using Adderall for nonmedical purposes, 89.5 percent also reported binge drinking and 55.2 percent were heavy alcohol users. Sometimes students combine the two. People take Adderall, a stimulant, while drinking alcohol, a depressant, to counteract the drowsiness that comes with alcohol consumption.

“I remember the first time [taking] Adderall was one of the first nights I ever got drunk in my entire life,” said a KU sophomore who wanted to remain anonymous for legal reasons. “It was one year ago. I was scared shitless. I was scared out of my mind. I didn’t know what it was going to do to me. I don’t do drugs; I didn’t even drink. So I took a half capsule of Adderall and I drank with it. The next day I felt like a different person – like my eyes had opened in a bad way.”

The U.S. Drug Enforcement Administration classifies Adderall, an amphetamine, as a Schedule II stimulant, meaning it has a high potential for abuse.

“Selling Adderall to your friends and stuff? Absolutely not,” she said. “The Lawrence [police] has bigger people to worry about than just some 18-year-old kid who has a prescription who’s trying to make a few bucks. They’re not going to spend their time with something like that.”

The Lawrence Police Department has a joint task force with the Douglas County Sheriff’s Office called the Drug Enforcement Unit. Kim Murphree, a police spokeswoman, said the task force works with all Lawrence police officers in its investigations.

“The unit vigorously investigates the illegal use of prescription drugs,” Murphree said, “and the LPD does all it can to foster education and public awareness.”

Despite the rate of drug abuse, Dr. Brad Phipps, a family doctor at Lawrence Family Practice Center, said he is not skeptical of prescribing Adderall to college students. He said the diagnosis is frequently missed among intelligent individuals who get through high school without any trouble.

“They get into college and there’s less support, more independence required, heavier workload, more rapid turnaround time and more requirement to be self-motivated,” Phipps said. “A lot of times that can put even a highly intelligent, functioning ADD person over the edge. So no, and I’m especially not skeptical in using it if I’ve done the formal testing. I rely on that heavily.”

Students who don’t have ADHD but use Adderall are at risk for more than legal consequences. Phipps said harmful side effects include anxiety, agitation and insomnia; health risks include addiction and anorexia. The KU sophomore said she experiences side effects when using Adderall, but she hasn’t had any serious effects.

“It’s fast,” she said. “Your heart rate will speed up really quickly and you can kind of feel your heart beating really fast. The first time I took it, it felt like my heart was going explode out of my chest. But after about 20 minutes of that, you just feel a lot more awake and more focused.

Keeler Montgomery said he doesn’t know if Adderall abuse is a serious problem on the KU campus. He said he thought students would still find ways to try to get ahead academically with or without Adderall.

“Kids are always going to find things to like cheat and ways to cut corners,” Montgomery said. “It’s better to take it and then get your work done and actually do it and learn the stuff than to just cheat on the actual test. It beats the alternative – failing.”

BRYANT: In the U.S., 8.4 percent of children between the ages of 3-17 years old have been diagnosed with attention deficit hyperactivity disorder. According to the Centers for Disease Control and Prevention, around 5.2 million children struggle with symptoms such as anxiety or inability to stay focused. Many of the symptoms of ADHD are also symptoms of depression and anxiety disorders. Dr. Brad Phipps says it’s difficult to diagnose ADHD, but if antidepressants don’t seem to help a patient, he will refer his patients for further testing.

DR. PHIPPS: A lot of times what I’ll do is I’ll actually have them go see a psychologist to do what we call formal testing. They do a battery of tests that looks at their ability to learn and remember, stay on task, stay focused, that sort of thing. And I use that a lot because adolescents are hard to read sometimes, so having all the objective data you can makes it better. Once I’ve done the formal testing, which I almost always do in the adolescent and young adult, and they have – the psychologist indicated the diagnosis of ADD is likely, then it basically comes to where the rubber meets the road and you try medicine to see if they get better.

BRYANT: Dr. Phipps says he’s not skeptical of prescribing Adderall to college students, but the process to gain a prescription can be rigorous.

PHIPPS: It’s a little more difficult than your standard medicines because it’s what we call a scheduled medication, so it has the guidelines and all the legal ramifications are monitored by the DEA. It is a medicine that is frequently abused or sold, but it’s more often – I’ve almost never seen it be abused by ADD people, it’s usually by ADD people’s friends. So as long as they show a moderate amount of maturity and responsibility with medicine, it generally is something that’s not that hard to do and we certainly feel like that the medicines are safe and it’s not something that we’re scared about using. I’ve been using Adderall and those types of medicines for 20, 30 years and it’s rare to have even a mild side effect or problem

BRYANT: This is Tara Bryant for Health on the Hill.